Not Your Instant Ramen Noodles

Walking through Bethesda during this weekend’s cold spell made me crave one dish: a hot, steaming bowl of noodles to warm me up. Luckily, I knew just the place. Ren’s Ramen, located in a quiet, nondescript mini mall on Arlington Road, has been dominating the D.C. foodie circuit since its opening last May. After months of reading about its “luscious, complex broth” and “righteously curly and chewy” noodles, I had been dying to try it. And Saturday’s tornado-like conditions (I may be exaggerating, but it was super windy!) presented the perfect opportunity.

Ren’s Ramen is situated in a tiny storefront; the room seat maybe 20-30 people. Wood tables and counters come unadorned, and a few banners with Japanese calligraphy and photos of Japan adorn the egg-yolk-yellow walls. Though some might say the restaurant lacks ambiance, I actually found it quite pleasant. The room felt alive with diners milling in and out, slurping on noodles, and chatting amongst themselves.  The wait staff was also quite friendly, greeting customers with a congenial “Konichiwa” (or “good afternoon”) as they walked in. 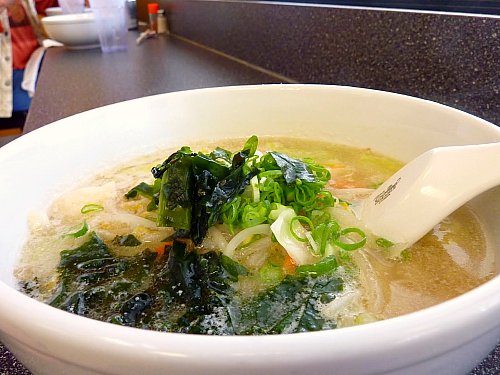 The real draw at Ren’s Ramen is, of course, the ramen. The shop specializes in Sapporo-style ramen, which to my knowledge, means a richer and fattier broth. My roommate, a vegetarian, ordered the Vegetable shio ramen ($11), which arrived with a heaping pile of seaweed, steamed cabbage, scallions, and bean sprouts. The broth, though heavily salted (the menu said “salt-flavored,” to be exact), was surprisingly soothing and smooth.

I ordered the Sapporo Shoyu ramen ($10, pictured at the top). The broth was much darker than the vegetable version, and flavored with soy sauce rather than salt. It was also verrrrry salty, and I could see a thin layer of fat glistening on the broth’s surface. These traits would usually turn me off of a dish right away, but somehow, at Ren’s Ramen they worked. The broth was so tasty, and complimented the chewy ramen noodles perfectly. And oh, those noodles. They were not the thin, cardboard-esque noodles found in cup-of-noodle. These noodles had a bite to them, a subtle eggy flavor, and a delightful chewiness that was quite addicting. And last, but not least, my ramen was adorned with 3 slices of roast pork. This was perhaps the best pork I have eaten in a while. The fat melted in my mouth and left a smoky, earthy flavor that was just heavenly. I wish there had been more than just 3 pieces, but then again, maybe that was better for my cholesterol. 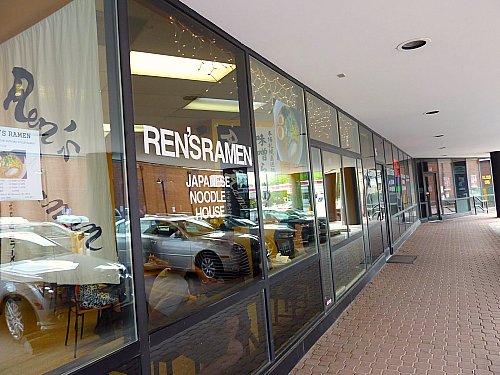 After drinking about 5 glasses of water, we left Ren’s Ramen feeling full, content, and ready to face the windy weather. But, in typical glutton fashion, we somehow wandered over to Downtown Bethesda and…were lured into Georgetown Cupcake.

Now readers, I have to make a confession. This was a moment of weakness. Until then, I had made it a point not to succumb to the Georgetown Cupcake craze. Yes, I had heard from friends how good the cupcakes were, but I just could not stomach the whole waiting in line for 30+ min…for a “designer” cupcake. Plus, I am a loyal customer of Baked and Wired, which in my opinion, serves the best cupcakes in D.C.

But the sickeningly cute cupcake display and impossibly short line (only 10 people!) lured me in. And I have to say, I was very impressed with the array of flavors (from key lime to cherry blossom to chocolate squared) and the not-too-steep price ($2.75). I ordered a salted caramel because I love anything that’s sweet and salty (and caramel, for that matter). The cupcake was decent, though not mind-blowing, and it had too much frosting for my taste. I certainly wouldn’t wait in line for it again, but I do sort-of understand the appeal. It’s hard to resist a cupcake that’s as adorable as this:

To satisfy your next ramen and cupcake cravings, head to Ren’s Ramen and Georgetown Cupcake in Bethesda!

Unpaid Gourmet tip: Follow @GTownCupcake on Twitter to find out their free secret flavor of the day.